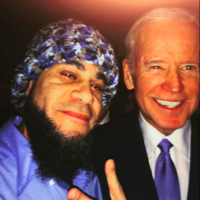 I am the founder of AllHIpHop.com and this website, CollegeHIpHop.com. Thank you for reading.
Articles Written
671
LATEST ARTICLES WRITTEN
Feb 18, 2019

The Gary Clark Jr. live experience is so bonkers that, frankly, he’ll never be at risk of falling off.

Rap star Drake checks in with a motivational message.

From Lawyer To Rapper: Lemzi Tackles Social Issues Through Music

Lemzi gave up his career as a lawyer so he could tackle important social issues using hip-hop.

Check out some new music from City Girls and Cardi B, Belly Squad, Mal & Quill and more.

Here Are Three Reasons Why J. Prince Says You Should Find An “OG” And Ditch “IG”

Thanks to the rise of social media, and sometimes a lack of parental guidance, young people turn to social media in search of answers and guidance. J. Prince has some better ideas.

Emmanuel Jal is an award-winning rapper from Sudan who just dropped a new release with his sister to celebrate World Refugee Day.

Is it time for a social media cleanse?

Artist Spotlight: Danny Garcia Aims To Knock Out The Musical Competition With The SiAngie Twins

Boxer Danny Garcia is getting into a new profession - the music business.

Sallie Mae leadership, employees, and educator-turned-hip-hop artist Dee-1 made the announcement on Sunday at the company's second annual 5K race.

Kanye West's new album contains references to an obscure drug, that is now exploding in popularity.

Lil Wayne, Lil Wop Lil Dicky, Lil Pump.... the list of "Lil" rappers is huge. Here are the ones making the biggest difference.

CDs and Vinyl Sales Are Killing Off Downloads

The RIAA just released some interesting facts about CD and vinyl sales in 2017.

DJ Khaled is giving away over $20,000 in scholarships to high-school and college students.

Snoop Dogg challenged a design firm to transform his recording compound into an artistic wonder - and the company delivered.

A business professor from the University of Maryland explains how "Black Panther" is inspiring young African American girls.

Pablo Escobar’s Luxury Villa Could Be The Spot For Rappers

Rappers may has their newest location to shoot videos, thanks to Pablo Escobar.

Kendrick Lamar has notched a first for hip-hop, and it involves college football.

Timati is a famous rapper over in Russia. And he's paying tribute to the country's leader this month, with a hamburger.

Diamond and Silk Defend President Trump With Some Bars

Diamond and Silk appeared on Fox's "Sean Hannity and Friends" talkshow, and they continued to defend President Donald Trump.

Steph Curry Has Nothing On This Toddler

This kid definitely has a future in the NBA, if his parents decide to hone his skills.

Moschino and Candy Crush have you covered this summer...

Major Nine is still in college but he’s producing hits for Rick Ross...

A New Hampshire geometry teacher has been removed from the classroom after she was seen in a video dancing to the song, "F--- Donald Trump," while dressed as the Republican presidential nominee.

Infographic calls out dangers of Halloween drinking and DUIs

Do We Swear Too Much?

Some people love to swear and can’t get enough of it. But you’ll occasionally hear complaints that if we’re not ...

Earth Day is upon us. And as you view this article on your phone or computer, you are helping to ruin the environment. And, just having our website up for you to even read these pieces damages our ecosystem. Sorry.

This week in Drake: He’s got his own whisky and a Rihanna tattoo?

Work, work, work, work, work. It’s hard work being Drake. Hardly a day goes by when our hometown hip-hop hero doesn’t make headlines for doing something, even if it’s just showing up courtside at an inconsequential basketball game.

A Look Inside The World’s Highest Luxury Suite

The St. Regis in Abu Dhabi is about to unveil the craziest suite that money can buy. The huge, extravagant room takes up two whole levels, occupying the 48th and 49 floors. It comes with bedrooms, cinemas and its own spa, a cheese and dessert room, a caviar ice-bar, an oyster room and roaming chef stations.

Woman Makes Business Out Of Men’s Lust For Kim Kardashian

The thirst for Kanye West's wife Kim Kardashian is real. The demand for Kim is so undeniable that there are imposters, wannabe's and even look-alikes. One woman, in particular, took advantage of her similarities to Kim Kardashian West and managed to cash in last year.

New “Trapathon” Party Turning Into A Successful Business For Students

Check out how two students are making "Trap Music" parties a cool business...

Should Future Be Considered A Lyricist?

It is easy to believe Future is just a highed up trap rapper when you hear to songs like “Xanny Family’ and “Back On E,” amongst others. But is there anything more under the auto-tune and catchy hooks? Some may oppose the opinion that Future is a genuine lyricist. Chelsea Walker of The Daily Athenaeum is not one of them.

A few years ago, rap star G-Eazy was just another student at Loyola in New Orleans, dreaming of the big time. During his time at the University, G-Eazy earned his BA in Music Industry Studies and started his career. He returned to Loyola to tell students about the business...

John Oliver explores some of the web's craziest conspiracy theories. Take a look!

Who Has The Tightest Presidential Logo?

If done correctly, a logo conveys the underlying message or core them of business, or brand. Each one of the four contenders still fighting for the Presidential nomination of their respective parties crafted strong, bold logos. Hillary Clinton, Bernie Sanders, Donald Trump and Ted Cruz are the frontrunners for the Democrats and Republicans. Picking a logo for their campaigns was no simple task.

Vince Staples Gets Intimate With Fans At Ohio State University

Vince Staples held court during an intimate concert at the A&R Music Bar in Columbus, Ohio, where he performed songs from his double album Summertime '06. The rapper impressed fans from the University of Ohio, during a performance last week.